Our afternoon of talks at Llantwit Major attracted a large audience and we were very grateful to our hosts at the church, thought to be that founded by St Illtud. Karen Jankulak reminded us that because of the unique connection of Illtud and his early monastery with the Life of Samson, which was perhaps written in the seventh century, we have one of the best attested early Christian sites in Wales. This perhaps uniquely brings early medieval Christianity in Wales back to within touching distance of antique learning in late Roman Britain. 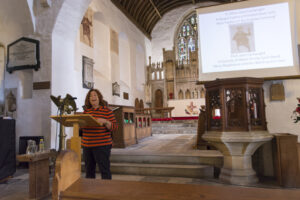 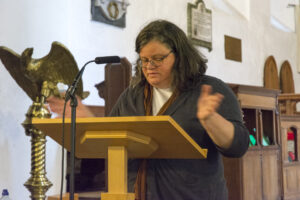 Jane Cartwright introduced the project and its work on medieval saints lives in Welsh, with particular reference to the Welsh Life of Mary Magdalene, whose image survives on the north wall of the chancel, one of a number of surviving medieval wall paintings in the church. David Parsons’ talk on place-names in Glamorgan that included the names of saints among their elements aroused a lot of interest, and I concluded the talks with a contribution on the reintroduction of imagery of the saints into churches in the area during the nineteenth and twentieth centuries, with examples of some depictions of Illtud.

Dafydd Johnston also read part of Lewys Morgannwg’s poem to Illtud, which was surely performed at the church in the sixteenth century. 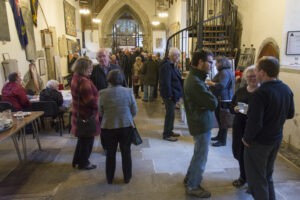 Participants taking a break between the talks, and the exhibition panels in the Galilee Chapel