Gloucester Abbey and the Lives of the Welsh Saints

The project arranged an afternoon of talks in the Chapter House at Gloucester Cathedral on 3 November 2018. The importance of Gloucester as the focus of the collection of traditions relating to saints in Wales has long been recognised, and the inclusion of the Lives of Cadog, Gwynllyw, Padarn and others in the Cotton Vespasian collection of Latin Lives closely maps some of the twelfth-century possessions of Gloucester Abbey in Wales. 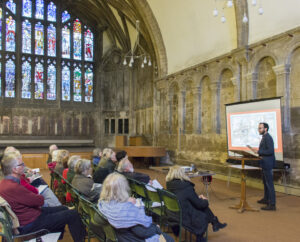 In her talk, Angela Kinney drew out some of these associations, and highlighted some particular issues relating to the conflicting traditions of some of the Lives found in this manuscript, raising questions concerning provenance and the competing claims of different churches. Paul Russell discussed the differences between the first and second Lives of Dyfrig (Dubricius), both of which are found in the Cotton Vespasian A. xiv. The earlier Life, found in the Book of Llandaff, emphasises Dyfrig’s importance to Llandaff, while the later Life, written by Benedict, a monk of Gloucester, reflects the influence of Geoffrey of Monmouth’s Historia Regum Britanniae (History of the Kings of Britain, c. 1137–8) and places a greater emphasis on the saints’ presumed archbishopric at Caerleon.

Francesco Marzella joined the project in October, and talked about the encounter of Canute and Edmund Ironside at Alney, close to Gloucester, in the early eleventh century. The afternoon was concluded by Martin Crampin with an introduction to the nineteenth- and twentieth-century imagery of Dyfrig. 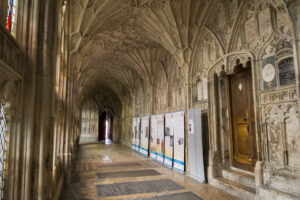 The project exhibition was on display at the cathedral in the weeks preceding the event. It was placed outside the Chapter House in the beautiful fourteenth-century cloisters, now well-known for its use as a setting for film and television.