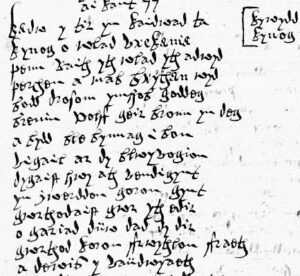 Although there is no Life, there are primary sources for Cynog and his cult in Welsh, Latin and English, spanning the period from the late 12th to the early 18th centuries. Besides the sources detailed below, brief references in medieval Welsh verse include TyrnogSH, SeintiauHCLl1, SeintiauHCLl2; two further poems by Huw Cae Llwyd (GHCLl 9.62, GHCLl 38.19), one by Hywel Dafi (GHD 60.42), and one by Rhisiart ap Rhys (GRhB 35.28). Finally, Cynog (as Conoch) is coupled with Derfel Gadarn ‘and soch other Welsch godes’ in an extraordinary letter from Bishop Barlow of St Davids to Thomas Cromwell in 1538 railing against the local taste for ‘antique gargels of ydolatry’ (Wright 1843: 208).

i. De situ Brecheniauc is the oldest extant version, a Latin text surviving in a MS of c.1200 (London, British Library Cotton Vespasian A. xiv,  10v–11v). It gives a narrative account of Brychan’s royal pedigree, in Wales and Ireland, and then lists his various descendants, including 11 sons and 25 daughters, and many of their saintly offspring. The lists incorporate occasional additional details, such as where characters lived or are buried. The narrative explains that Cynog was Brychan’s first son, conceived by the rape of Banadlinet, daughter of the king of Powys; that he received his torque (armilla) from his father; and that in Brycheiniog he is celebrated as an important saint, and his torque preserved as a relic. A genealogy for Cynog is separately given, as is his resting-place, at Merthyr [Cynog].

ii. Cognatio Brychan is a variant version of De situ, also in Latin, surviving in a single 16th-century copy (London, British Library, Cotton Domitian A. i, 157v–158v). The structure of the text is closely similar to the earlier version, though much of the phrasing and many details are distinct. Cynog is conceived at the rape of Banadylued, daughter of the king of Powys; as a child he is baptised by ‘saint Gastayn’, apparently of Llangasty-Talyllyn BRE; Cynog is known to be Brychan’s son from his ‘?cap and torque’ (peleus et armilla); genealogies through Brychan’s paternal and maternal lines are given; he is said to lie at Merthyr Cynog.

It is hoped that a new edition of both De Situ and Cognatio will be made available on this site. For now the texts are in EWGT 14–19.

iii. Plant Brychan is a Welsh-language genealogical text, ultimately derived from material like that found in De situ. The entry on Cynog says he was a martyr, that he lies in Brycheiniog (some manuscripts specify in Merthyr Cynog), and that his mother was Banhadlwedd of Powys. See EWGT 81–4. A similar text is found in Oxford Jesus College 20, which begins with the ancestry of St Cynog, but gives no further details of him. See EWGT 41–4.  A new edition of Plant Brychan will be here

CynogHD
A poem by Hywel Dafi, who lived in the later 15th century and probably came from Brycheiniog. The text describes how Cynog, having ruled as a king in Ireland, renounces his throne for an eremitical life, comes to Wales, and battles giants and monsters on behalf of the local population. He triumphs with the aid of a heaven-sent weapon, a marvellous torque. Ultimately, however, he is martyred by decapitation, though he survives for a time with his head attached by a cord. New edition

CynogDE
A poem by Dafydd Epynt, probably of Merthyr Cynog, who lived in the second half of the fifteenth century. This piece is more allusive than Hywel Dafi’s (CynogHD), but it suggests a similar tradition that Cynog had been king in Ireland and renounced his throne for a religious life in Wales. Here he killed at least one monster, with the help of his torque, but was beheaded in the end. Certain details – such as his need to flee from vengeful Irishmen, or his youthful hunting of salmon, duck and stag – are unique to this text. New edition

Gerald of Wales, Itinerarium Kambriae
An account of a journey through Wales, accompanying Baldwin, archbishop of Canterbury, in 1188. In chapter 2 they pass through Brycheiniog, with which Gerald was particularly familiar, having been archdeacon of Brecon. He recounts the legend of Brychan, from whom the province is named, observing that ‘The Welsh annals bear witness to the fact that he had twenty-four daughters … [all of whom] ended their days blissfully in [a] state of sanctity.’ (Itin Kamb 31–2; Thorpe 1978: 91–2). Interestingly, and in keeping with the omission of sons here, Gerald does not associate Cynog with Brychan when he writes of him. Rather, he concentrates exclusively on the torque, as follows (Itin Kamb 25–6; Thorpe 1978: 86):

I must tell you what they say about a torque which is supposed to have belonged to Saint Cynog. From its weight, texture and colour one would think that it was gold. It is made of four sections, as you can see from the joins, wrought together artificially by a series of weldings and divided in the middle by a dog’s head, which stands erect with teeth bared. The local inhabitants consider this to be a most potent relic, and no one would dare to break a promise which he had made when is was held in front of him. On the torque there is the mark of a mighty blow, as if someone had hit it with an iron hammer. A certain man, or so they say, tried to break the collar, for the sake of the gold. He was punished by God, for he immediately lost the sight of both eyes. To his life’s end he lingered on in darkness.

he had stolen the torque of Saint Cynog of Brecknockshire and had hidden it in Dinevor. For this act alone he deserved to be captured and locked up, as an example of the judgement of God.

Whether this theft happened before or after Gerald apparently saw the torque, he does not say.

Hugh Thomas, oral tale
A story from BL Harley 4181, 129–31, a manuscript of Hugh Thomas (1673–1720), where it is said to have been collected by Thomas from ‘“the poor Jgnorant Country People” about the year 1702’. The English-language account shares various details with the medieval sources, but is quite distinct in many others. Particularly striking is the use of the term ‘Ormests’ for the monsters that Cynog must fight: this answers to gormes ‘monster, oppressor’ used in CynogHD two centuries or more earlier.

LBS ii, 266–8, printed the story at length from Harley 4181. A full transcript from the manuscript is given here; it fills out several details, especially at the end of the narrative, which is abbreviated rather unclearly by LBS.

The tale runs thus. Cynog retired from his father’s court to an eremetical retreat a mile from ‘Carevong’ (apparently Y Gaer) near Brecon, where he lived in poverty and wore on his head a torque, a ring of iron of his own making, ‘insteed of a Crowne of Gold’. Entreated to protect a local widow and her children, the holy man knelt and prayed in the face of a group of Ormests, and then – in response to a heavenly voice – flung his torque at the ringleader, killing it and dispersing the rest. Some locals were inclined to disbelieve the story until a scornful smith aimed a blow at the torque and was struck dead by a flying splinter. Later in life Cynog retired further into the hills, taking up with a group of hermits on the hill called ‘The Vann’ (Y Fan).  His fellow monks, however, resented his cheerful forbearance of the hardship of collecting water from the foot of the steep hill every day; when he was rewarded by God with a personal water supply on top of the hill, two of them attacked him and cut off his head with a sword. Cynog’s body carried the head down the hill and placed it under a bramble-bush. Recognising his saintliness, priests and parishioners at once buried his remains under the altar in their church, but this altar was repeatedly and mysteriously thrown down until they moved the remains to the site of bramble-bush, and raised the present Merthyr Cynog church above the spot.